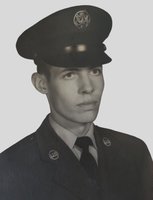 Woodie was born in Columbus, Georgia to the late Woodie L. Colwell, Sr., and Ruby Lee Colwell on October 18, 1943. He is also preceded in death by his brother, Richard Colwell. After Woodie served in the United States Air Force for four years, he went to Columbus College and graduated with a bachelor's degree in psychology. He then was an Electronic Technician at Robins Air Force Base. Woodie was an avid golfer, a member of Marion Road Gun Club, and an Atlanta Falcons fan. He also enjoyed reading and most importantly spending time with his family.