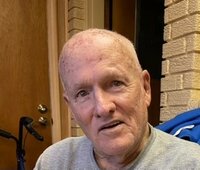 Centerville, Georgia- Tim Calvin Chafin, 89, went home to be with his personal Lord and Savior on Thursday, September 1, 2022. A Memorial Service honoring the life of Calvin will be held at a later date.

Calvin was born on November 6, 1932 in Rockledge, Georgia to the late Mary Ann Benton and B.L. Chafin. Calvin was a very hard worker who strived to provide for those he loved. Calvin served his country with honor and integrity in the United States Air Force for 25 faithful years. Upon his discharge, Calvin continued to serve his country as a civilian at Robins Air Force Base where he had served for an additional 15 years.

Calvin was very active within his community where he volunteered with the local AARP group for 10 years. Through his volunteering he had made countless friendships as well as endless memories that brought his warm smile upon his face. Calvin was a firm believer in his Lord and Savior Jesus Christ who he had served with all of his heart, soul, mind, and strength. He served as a Deacon at Oakland Baptist Church where he remained very active. Calvin loved his family and friends.

In addition to his parents, there awaiting for Calvin at the gates of heaven was his beloved wife, Carolyn Jackson Chafin, and his son, Terry Chafin.

The family would like to express their sincere gratitude to Patti Chafin’s family along with Lisa (Phillip) Keaton of Kathleen for taking care of Calvin with compassion and love during the last years of his life.

It is with great honor Heritage Memorial Funeral Home and Crematory has been entrusted with Mr. Tim Calvin Chafin’s arrangements.