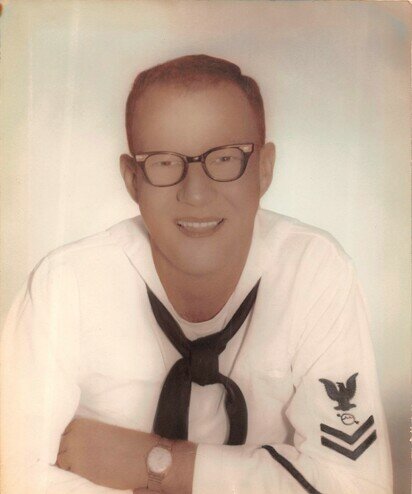 David Franklin Carr was born March 31st, 1942 at Good Samaritan Hospital in Cincinnati, Ohio and grew up in Grant County, Kentucky.  He attended school at both Mason and Corinth Elementary Schools as well as Grant County High School at Dry Ridge Kentucky.

David’s parents, Henry and Lucy (Hammonds) Carr, preceded him in death as did his siblings Anna, Henrietta, James, John, and Paul. He was bereaved by the death of his son Henry in 2016.  He is survived by one sibling, Geri.

Left to cherish his memory are his beloved wife Cynthia of 45 years along with their children Thomas and Dorothy. David’s daughters, Yvonne and Jody, grieve along with many nieces, nephews, and grandchildren.

David proudly retired from the United States Navy after serving 21 faithful years as a Chief Petty Officer. He was an air intercept controller on the Nimitz and a NIS agent among other positions.  He was able to enjoy his dream of living as a rustic farmer before moving to Maine where he was involved with Salvation Army serving for the ‘Meals on Wheels' and ‘Coats for Kids' programs.  He later became an Officer at the American Legion where he helped raise funds summing thousands of dollars in scholarships with his fellow veterans. David enjoyed playing cards in his retirement and won several poker tournaments over the years.  He was a man who loved being surrounded by those he cherished, both family and friends, who were like family.  David will forever be remembered for his loving smile and wickedly humorous personality.

To send flowers to the family or plant a tree in memory of David Carr, please visit Tribute Store
Tuesday
14
September

If you would like to watch the service live, please go to Heritage Memorial Funeral Homes Facebook Page under events.

Share Your Memory of
David
Upload Your Memory View All Memories
Be the first to upload a memory!
Share A Memory
Send Flowers