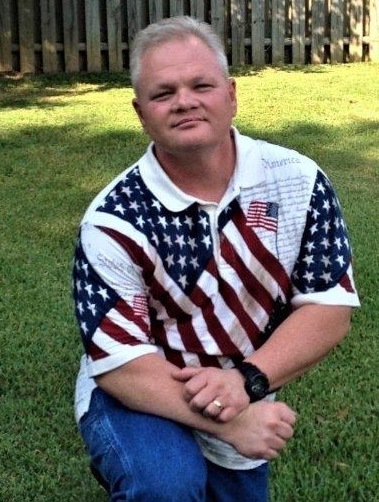 EJ was born “Ernest H. Jackson II” to Robert Carl and Adelheid Jackson in Fort Ord California on July 8, 1964. Eighteen months later they gave birth to his best friend, Robert Carl Jackson, Jr.  Eventually alcohol made the marriage tumultuous, and EJ and his brother would be raised by their mother.  The life that followed was filled with many challenges.  As a result of those challenges EJ developed strength, resilience, and a stubborn determination.  And he met Jesus.

By the age of 18 EJ was living on his own and sharing an apartment with his younger brother and a friend.  They flipped burgers at the local Burger King to support themselves.  That’s where he met his future wife, Tracey.  He introduced her to Jesus too.

You can’t support yourself long with a check from a burger joint, especially while trying to attend tech school and study electronics at night, so after high school graduation EJ joined the Air Force and became a security policeman.  He married the girl from Burger King and together they went to his first assignment, the 347th Security Police Forces stationed at Moody Air Force Base, Valdosta.

That first assignment made a huge impact on his life. For seven years he was part of a team of dedicated, hard working men who supported each other.  They worked together, played together, celebrated together, and went to war together.  By the grace of God they all came home together.  He told them about Jesus.

In Valdosta EJ and his wife had two beautiful daughters, first Kristen and then Katelyn. Those girls became the loves of his life before they were even born.  He bathed them, diapered them, played with them, taught them to ride a bike and later to drive a car.   He did all the things with them he dreamed of when he was a little boy without a father.  And he raised them to know Jesus.

After the war the team was shuffled around and many went on to other bases, other jobs.   EJ went to Hahn AB, Sembach AB, Robins AFB, Lajes Field, and back to Robins.  He worked as an SP and later as a Comptroller after he cross trained into Finance.  For the last 5 years before he retired in 2006 he served as the Deputy Director of Family Support at Robins. After retirement, he went to work for the Air Force in a variety of finance positions (shout out to the RMG), and even did a short-lived stint in contracting. In 2018 he transferred to the IRS.  Along the way, in each job, he made friends and told them about Jesus.

For all the friends he made, EJ was a very private person at heart.  When he was diagnosed with cancer in 2019 there were no phone calls, no social media posts to tell the news that rocked his family.  Instead he took that diagnosis and laid it at the foot of Jesus.  On Sunday, September 5, 2021, EJ Jackson went to be with Jesus.  He left behind countless friends and family who are so grateful to have shared a part of his life.  They are sad.  They are lonely.  But they are glad he isn’t suffering and they know he’s with Jesus.

To send flowers to the family or plant a tree in memory of Ernest Jackson, please visit Tribute Store
Saturday
11
September

Share Your Memory of
Ernest
Upload Your Memory View All Memories
Be the first to upload a memory!
Share A Memory
Send Flowers